Friday 13th May 2011.........Sports reserves lifted the Yeovil League Premier Division Cup last night when they defeated Normalair by 3 goals to 1 at Somerton. Sports dominated the first half with Luke Peaty ruling the roost in midfield and it was no surprise when Ant Herrin banged in the opener after 20 minutes. Sports continued to press but despite hitting the crossbar could not get that elusive second goal and it was 1-0 at the break. In the second half Normalair got their act together and began to push forward looking for the equaliser but Sports were still dangerous on the break with Leo Hayward's pace always a problem to the Normalair defence. In the 65th minute Sports went 2-0 up. Ash Powers made a storming break out of defence and drove the ball low into the net from 18 yards. Players were tiring now and both teams made substitutions, Jacob Bromfield, Sam Gibbs and Lewis Morgan coming on for Sports. Normalair went for broke now pushing lots of men forward and it paid off in the 75th minute when Ian Harris was put through and he buried the chance to make it 2-1. It was game on now, and Sports had a let off when a Normalair shot came off the post, but back came Westlands and in the last 10 minutes pushed Normalair back with some good attacking moves down the left. Lewis Morgan was prominent up front and he finally finished off Normalair with a goal two minutes from the end, driving the ball into the far corner after taking a pass from Haydn Binding. It was a deserved victory for Sports in the end as they played some great football on a difficult pitch, especially in that first half when Normalair just didn't have an answer.

MANAGER OF THE MONTH

Wednesday 4th May 2011.......Westlands manager Kevin Leigh received his Manager of the Month award for March from the Magna Homes Marketing Manager before the recent Wincanton game.

Friday 22nd April 2011.......Westland Sports Reserves lifted the Yeovil & District League Charity Cup this morning by beating TOR 1-0 at Somerton Sports Ground. On a hard bumpy pitch the match was hardly a classic but Sports always looked in control and deserved the victory. Westlands youngsters (we had eight youth team players on the pitch at the final whistle) looked the sharper from the off and in two minutes went ahead. From a corner on the left, a Leo Hayward header hit the crossbar and Ant Herrin was on the spot to nod in from 5 yards out. A great start for Sports but little did we know that this would turn out to be the winning goal. In a way the spell of fine weather rather ruined the game as neither side were able to control the bouncing ball very well and mistakes were frequent. Nevertheless the lads competed very well against a much more experienced side and in Sam Beard had an outstanding centre half whose mastery in the air completely nullified TOR's long ball tactics. At the end skipper Jake Russell lifted the cup for Sports for the first time in 21 years so it was an overdue win. Yeovil & District League Chairman John Shearing announced that over £600 had been raised from the tournament for the Somerset and Dorset Air Ambulance, a very worthwhile cause.

Monday 11th April 2011........Westland Colts, our Under 17 side, pulled off a major shock yesterday by beating favourites Shaftesbury and lifting the Dorset FA Youth (Under 18) Cup. In a close fought final at Sturminster Newton, the Colts broke the deadlock in the second half with a goal from Oscar Latas. With Lewis Morgan injured and Niall Woollard failing a fitness test, the omens were not good for Colts against a team who have only lost once this season but every one of the players gave it their maximum effort to secure the win. Manager Shaun Kitto was delighted for his team who have now won a league and cup double this season and praised the dedication and enthusiasm of his players. Match winner Oscar Latas is a prime example of the commitment of these lads. Oscar should have returned to his parents homeland of Portugal a month ago but stayed on to play in the Cup Final. To score the winning goal was a dream come true for Oscar and a fitting way to end his last game for the club. 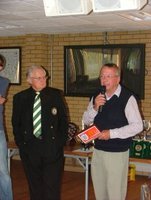 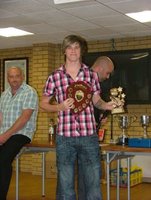 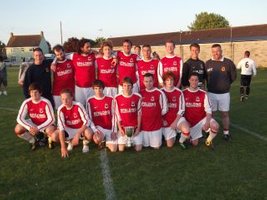 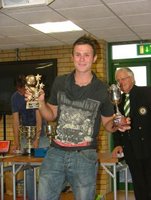 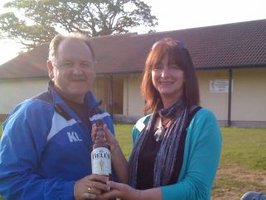 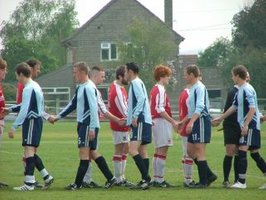 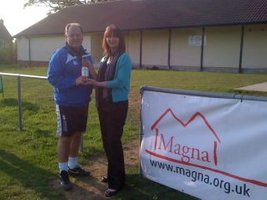 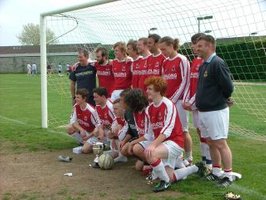 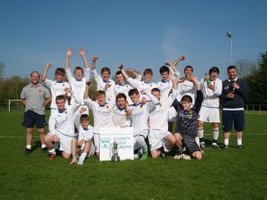