Tuesday 17th May......the Presentation Night was held  last Friday night in the Alec Stock Lounge at Yeovil Town FC (our thanks to Clive for the use of the venue).

Players, friends, family and guests enjoyed an entertaining evening expertly compered, as usual, by our intrepid chairman  Phil Wells. The awards were presented by ex-Yeovil Town  players Steve Thompson and Gerry Pearson and those receiving the awards were as follows:-

Mr Frank Irwin of Regis Foods presented the 'Regis Foods Man-of-the-Match' awards. These went to the players who had received the most man-of-the-match nominations in the match reports on the club website.

A selection of pictures taken during the evening are shown below. Apologies to those whose presentations are not included, I had a bit of a focus problem !

Sunday 15th May...........a fantastic day down at Chapel Gate in Bournemouth as Westlands Under 16s lifted the League cup with a thrilling penalty shoot-out victory over Bridport. After the full 80 minutes it was 1-1 with JAMIE IRWIN notching Sports goal. Then, in extra time, Bridport took the lead against the run of play but in the dying minutes CHARLIE BERRINGTON thumped in the equaliser. On to penalties and Westlands were ice-cool , scoring 4 to Bridports 2 to take the cup.  JAMIE IRWIN, JAMIE THOMPSON, JAI MYALL and HARRY PANAYIDES  all scored from the spot for Westlands. With Sports having confirmation from league officials that we had also won the league, it turned out to be a double celebration for the lads after the game. Congratulations to all the players and Lee Howard and Adey Laney the management team.

Sunday 27th March.............yesterday's Westland Sports v Weymouth Reserves Dorset Premier League match at Alvington was abandoned. After 45 minutes of football in the most horrendous conditions, the officials called a halt at half-time. With a gale force wind and lashing rain and hail in their faces Westlands tried to defend their goal in the first half but it was impossible as goal kicks were barely clearing the 18 yard box and attempted clearances could blow back over the defender's head for a corner. Corners were a nightmare to defend as the gale whipped the ball straight into goal. We only managed one shot at goal in the whole half, an Ant Herrin effort that curled past the far post. For the rest of the half it was Weymouth (plus wind, rain & hail !)  battering the Westlands goal. We conceded two, two more were disallowed, two hit the post, and numerous other attempts were bravely defended by an overworked Sports keeper Sam Watts and his fellow defenders. It really was mayhem and as the half progressed puddles began to form on the pitch which held up the progress of the ball and players were beginning to slide uncontrollably into tackles. Common sense prevailed at the interval when the referee decided to call it a day. Both teams were disappointed, Weymouth as they were winning 2-0 and Westlands, as we had done the hard bit and to have come out of it only two down we felt was a good result that we could definitely turn round in the second half. Nevertheless I think everyone knew it was the right decision as there is no real pleasure in trying to play football in these conditions and it was getting dangerous.

THERE was heartbreak for Steve Coward’s Chickerell United squad on Saturday as they fell just a day short of going a calendar year unbeaten in league action.

The Chickens saw their lengthy run without suffering defeat put to an end at Westland Sports Reserves on the weekend, with Steven Ormrod and Matthew Mullings both on target for Westland to deal the hammer blow to the away side’s hopes.

That meant Coward’s troops were finally conquered, 364 days after their last loss in the division.

After the Chickens fell behind on Saturday, they spurned a great chance to level things up from the penalty spot when Nick Etherington’s spot-kick came back off the woodwork.

But the Stalls side then did manage to get themselves level at 1-1 with Dan Welch converting from the spot at the second time of asking for his team.

But, with the record on the line, Westland came out in the second half to net what proved to be the winner early on.

“We should have won the game in the first half,” Coward said.

“We were the better side by far in the first half but we just fell asleep in the second. We just looked as if we didn’t have any energy and we were absolutely knackered”.

“We looked unfit, tired and lethargic, whether that was because it was a heavy pitch and we put too much into it in the first half I don’t know”.

“They were a fit side with some young lads in there. Whether for us it is lack of games I don’t know but in the second half we were a different side”.

“Everything we talked about at half-time we did the opposite. I was not best pleased”.

“They came out in the second half wanting it more.”

Coward added: “They had one lad from the first-team who was just too good for us. He was too good for the DPL and was one of the best strikers I have seen”.

“We know there is room for improvement. It’s not as if we were playing to our best and we still lost the game”.

“Our aim is to win the league, we cannot afford to drop points like we have done.”

The reverse sees Chickerell slip to third spot in the league table but they remain just a point behind leaders Witchampton United with a game in hand.

Monday 28th September............congratulations this morning to our Under 18 player Jack Dicker who

has been selected to represent Somerset in the prestigeous FA County  Youth Cup.

The match is against Essex  and will take place on Saturday 10th October, kick off 14.00 at Dagenham

Tuesday 5th January.............with no match reports this week  we thought we'd take a  little trip back in time and have a look at the opening games  in two seasons gone by.

On Saturday 3rd January 2011 Westlands had a home game to STURMINSTER NEWTON in the Dorset Premier League and we got the year off to a good start with a 2-0 victory. At this stage Sports were building the side which, under the management of Kevin Leigh, would go on to win the treble the following season. Young players were being introduced – Haydn Binding (now known as Hodges) made his debut in this match and Sam Farthing, Matt Day, Aaron Mead, Jason Sims and Leo Hayward all figured prominently. Indeed, after a goal-less first half, it was LEO HAYWARD who volleyed in the opening goal in the 55th minute. Ten minutes later Haydn was brought down in the box and DANNY CALL thumped in the penalty to make the points safe.  The line-up was: 1. Ashley Knibbs 2. Dean Vincent 3. Rich Lindegaard 4. Stu Smith 5. Paul Leatherland 6. Haydn Binding 7. Sam Farthing 8. Steve Lindegaard 9. Dan Call 10. Andy Smith 11. Matt Day 12. Aaron Mead 15. Leo Hayward 16. Jason Sims.

On Saturday 10th January 2014 Sports entertained BLANDFORD UTD at Alvington in the Dorset Premier League in the first game of the year and again we got the year off to a good start with a 2-1 win. A lot had happened in the four years that had passed since that match in 2011. Westlands had spent two seasons in the Dorset Senior League but had now returned to the Premier League having won the Senior League in season 2012/13 under the leadership of player/manager Stu Smith assisted by his brother Andy. After promotion we had held our own in the first half of the season with a record of Won 7 Drawn 3 Lost 8 and coming in to the New Year and we were looking to consolidate our mid-table position. Josh Payne scored in 15 minutes against Blandford to set us on our way and when Louis Irwin smashed in a second in 27 minutes we were well on top. In the second half we squandered numerous chances to make the points safe and when the visitors scored with five minutes to go it was a twitchy wait until the final whistle. Incidentally, the appearance of three Carney brothers on the pitch for Westlands was thought to be a record for the club. 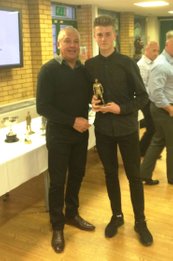 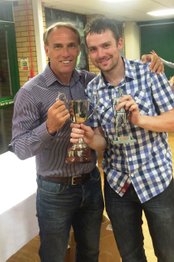 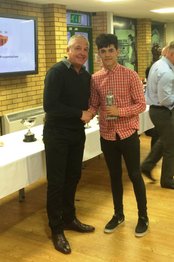 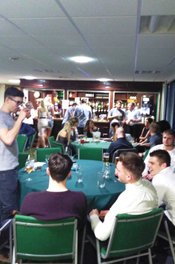 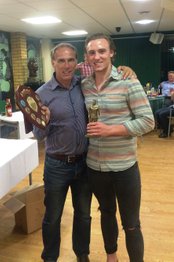 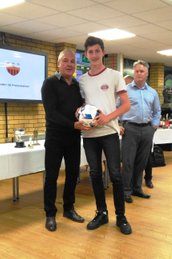 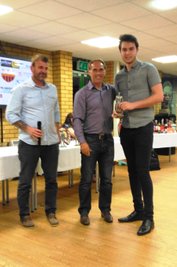 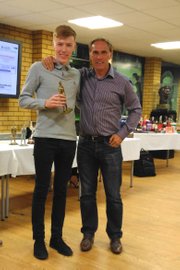