The previous season having ended in such chaos with the loss of our managers, our first team players and our pitch, it was a miracle we managed to keep things going. Stu Smith, assisted by brother Andy, stepped in to run the first team and Andy Jackson stepped up to join Pat Denman in running the under 18s. The first team (last year's reserves) would play in the Dorset Senior League as the reserves had been promoted to that league from Division 1. The Under 18s would continue in the Youth Division 1 and would act as back-up to the first team. As far as the pitch was concerned, and in consultation with league officials, we decided to use the bottom pitch as our home ground for both teams.

Our final league position of 6th was a good effort in our first season.

Obviously, we lost too many away from home but a look at the results shows that of the 7 matches we lost away, four were by the odd goal. All these were games we could, and should have won but lost out in the end.

In our defence of the cup we had won the previous season, our team did pretty well considering the circumstances. A first round demolition of Timsbury got us off to a good start in the first round. We then had to travel to Congresbury who were at that point unbeaten. Who can forget Ash Powers headed winner in extra time which took us through to the next round. There we faced another away trip, this time to play Middlezoy Rovers where we eventually lost out by the odd goal in an enthralling battle. Middlezoy went on to reach the semi-final losing to eventual winners Wincanton.

The final league position for the Under 18s of 4th was a respectable finish but as there were only 8 teams in the league it puts us firmly in mid-table. The league started with 12 teams but 4 pulled out due to various problems, usually lack of players. It just shows how difficult it is to run a youth side and our managers Pat Denman and Andy Jackson have to be congratulated on what they achieved. Due to the departure of several players from the previous year's Under 17 & Under 16 sides our management found it necessary to boost the squad and a number of younger players were brought in.

The league table shows perhaps our home form could have been better as we lost as many games at home as we did away, nevertheless the overall picture is a steady season with 6 won, 6 lost and 2 drawn.

Our best form was probably reserved for the cup. Two good victories on the road saw us travel to Bournemouth Poppies for a fourth round tie where we came back from 2-1 down to record a memorable 3-2 victory. Another away draw to Hamworthy Utd in the semi-final saw us lose out by the odd goal in a close contest, Hamworthy going on to win the cup.

Summing up the season:-

The final analysis shows two mid-table finishes for our sides with a couple of decent cup runs as well. Considering the position at the start of the season it reflects a season of consolidation for the club and sets the foundations for our future development.

Saturday 25th May.........well, what can I say, a riotous evening was enjoyed by all. Speeches by Derek Smith and Stu Smith (!) were the "highlights" of a fantastic night held together (just!) by the astute compering of Phil Wells. Possibly the cheap cider promotion had a hand in the events but it all made for an entertaining presentation night.

The winners of the trophies were as follows:

A presentation was also made to Brian Rousell who stepped down as chairman at the end of the season. Phil read out the list of trophies won under Brian's chairmanship and the number of leagues and cups won was quite staggering. Hopefully we can carry on his good work.  It was nice to see so many parents and supporters coming along to join us, having such a good turnout made the evening a great success.

Monday 24th September 2012...........an old programme has been given to me recently which is quite interesting in terms of the history of the club. The programme dates from 1975-76 season and there are several points of interest. Firstly, as you can see, the name of the club in these days was "Westlands Yeovil" although it appears the nickname was "The Sports", and the badge showed the initials around the helicopter blades. Also evident is the venue which was the famous ground at the Sports and Social Club and was known as 'Westbourne Grove' but I see has been more accurately described as 'Westbourne Close'. Another feature of note is the fact that the club were in those days playing in the Western League, and the programme inside advertises a match the following week in the FA Trophy !  How things have changed !  On this particular day, Monday 1st September 1975 we were playing Bridgwater and the Westlands team lined up as follows:- G.Miller,T.Read (Capt), B.Gould, P.Smith, R.Wilkins, M.Hodges, B.Dennett, B.Kingsmill, K.Wookey, S.Briggs, T.Masters and the sub was A.Sturgess (only one sub allowed in those days !). It was also interesting to note that we had a Supporters Club in these days who had their own committee and were responsible for producing the programme. If anyone can supply any more information on this particular match or any info or memorabilia from the past we would be delighted to hear from you.

"It is with regret that I announce that following the recent events that have knocked the stuffing out of our club, we will not be competing in the Magna Dorset Premier League next season. However, I have requested a dispensation to defer our membership for the season ahead so hopefully we will be back in 2013, after we have gathered ourselves together and re-established our identity.

Westland Sports will maintain its position in the Dorset Senior League next season and our youth team will play in the Dorset Youth (U18) League on Sundays.

I hope the core of players will remain loyal to the club with pre-season training being announced soon. Next season we will have the exclusive use of two pitches at Alvington together with the changing rooms and training area so all is not lost.

With these arrangements in place, I would now like to comment on the broader issues of why we find ourselves in this position:

It has always been my worry since we were forced out of Westlands Sports & Social Club into the newly formed Yeovil Town Community Sports Trust that the inevitable tsunami of Yeovil Town FC would engulf us. We have never had our own assets or the financial stability to combat that. The main factors are deeper than that, firstly the greed of professional footballers and managers are crippling the amateur game. The blame for the loss of our pitch I put squarely on the shoulders of Gary Johnson, the manager of Yeovil Town FC. His demands at Yeovil Town to capture the use of the main pitch were our downfall. What sticks in my throat is that he came to present the awards at our presentation night then stabbed us in the back ! Well done Gary !

Secondly, Yeovil Town FC must take part of the blame as they employed Mr Johnson in the first place, but I know they have tried desperately to accommodate both parties despite Gary’s demands, but Alvington proved too desirable in the end.

Thirdly, Agusta Westland must share the blame in promoting the Community Trust. The purpose of the Community Trust was to encourage sport within the community, with Westland Sports being a major part. We have fulfilled our part in giving hundreds of youngsters the opportunity of getting into football, giving them the confidence to face the challenges of life. With this current blatant disregard for community welfare, I wonder if the Trustees have lost their way or even care.

Fourthly, the Somerset District Council is also to blame. There has been little investment in sporting facilities within the Yeovil area over the recent years. Only talk and the planting of daffodils. The lack of suitable sporting venues is a disgrace but they do nothing.

Yeovil Town FC will unfortunately bear most of the blame for the situation we are in, but I have every sympathy with them, as they too could be a victim of their own success in the search to upgrade their own facilities.

No matter what happens, no one can ever take away the success of our club over the last 13 years that I have been involved. This has culminated in the unprecedented treble, a feat possibly never to be repeated. I would like to take this opportunity to thank all the players, staff and supporters for their fine achievement. The memory of Michael scoring the final goal in the Somerset Senior Cup Final at Street and running round the pitch with his shirt off will be a moment of pride forever".

"It is with great sadness that we announce the resignation of Kevin Leigh, Neil Waddleton and LLoyd Green from their respective positions at Westland Sports FC.

Kevin and Neil decided to leave the club following the Yeovil Town Community Trust decision to withdraw our use of the main pitch at Alvington and allow Yeovil Town FC to use it as its first team training ground.

Westland Sports have been afforded the continuing use of the two remaining pitches at Alvington together with its training area and have entered teams in the Dorset Premier League, Dorset Senior League and Sunday Dorset U18 League for next season. 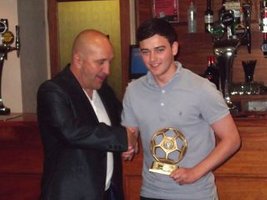 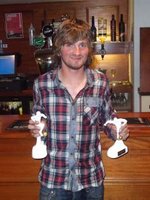 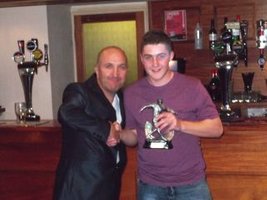