Friday 23rd May............with the AGM now completed we are able to formally announce the launch of the new Westlands Sports Youth Section for next season. This has come about following  our merger with LYDE UNITED YOUTH FC which has now taken place. Lyde were a well known and respected club from the east of Yeovil and have been providing opportunities for the youth in their community to play football  since 1992. Many good players have come through the ranks at Lyde and we hope to build on these successes in the future under the Westland Sports name. As a result we   are currently recruiting players for our new youth teams for next season. We will be running teams from Under 7s to Under 16s so please contact Dexter on 07816 354210 or Matt on 07964 150794 for more details. We aim to make Westlands the top youth football club in the area so make that call now. All matches will be played in Yeovil at Westfield Academy and the teams will be entering the Yeovil Mini and Youth Leagues next season.

Saturday 26th August...........a picture has been posted on Twitter  that shows a view of the old Westland Sports football ground in Westbourne Grove. We were playing in the Western League at that time but subsequently the ground was sold for housing and was where the Century Park estate now stands. Thanks to Vince Taylor of the magazine 'Groundtastic' for the memory.

Wednesday 4th October................ we are delighted to announce a welcome return to the club for a player who last played for us in season 2014/15 but moved on to play at a higher level. Manager Harry Gibbs was pleased to watch Szymon Matuszewski sign the forms after training last night and stated "Szymon is a top player and will be a valuable addition to the squad, we are delighted to have him back". Szymon was a prolific scorer for Westlands in his previous spell at the club and we look forward to seeing him in a Westlands shirt once again.

Tuesday 3rd October...............the September edition of the  online magazine Football Focus has an article featuring the club on page 20. To view follow this link http://footballfocusmag.com/issue-74

Tuesday 3rd October...............congratulations to our three Westlands players, Sam Watts, Josh Payne and Sam Plumley who have been selected for the Dorset Premier League squad to play the Kent Premier League in the FA Inter-County Cup. The match will take place on Saturday 14th October at Swanage FC, kick-off 3.00 pm.

Sunday 2nd December.............Westlands Reserves pulled off a giantkilling act in the Dorset Senior Trophy when they travelled to Weymouth to play DPL side Balti Sports and beat them 3-1 ! After going behind early on Sports hit back and two goals from STEVE ORMROD gave them a 2-1 half time lead. It was backs to the wall for Westlands in the second half but they hald firm and clinched the tie with a late goal from ALEX MURPHY to book their place in the next round.

JOSH IS A WINNER !

The predict the score jackpot has  been officially won this weekend. Our very own star striker Josh Payne  has won thefantastic sum of £850 with the Southampton equaliser against Bournemouth on sunday topping off a great weekend. Entry tickets are only £1 a go and can be obtained from any

Westlands player or committee member or on match day at the ground. All you have to do is predict the correct score in three selected matches, how difficult is that ?

ONE FROM THE MEMORY BANKS

Monday 12th February................With the weather wiping out both our games on Saturday, I took myself over to Sherborne to see the Western League “six-pointer” against Warminster Town.

My thoughts were immediately transported back to a spring evening in 2012 when Westland Sports travelled down to Holt Utd needing just one point to clinch the Dorset Premier League title. We lined up with James Smith in goal, a back three of Rich Lindegaard, Ben Cochrane and George Mapletoft, the midfield five were Steve Lindegaard, Lewis Morgan, Steve Burton, Dean Corden and Matt Day, with Sam Jarman and Marc Caines up front. Subs were Olly Wake and Haydn Hodges and also on the sidelines were the management team of Kevin Leigh, Neil Waddleton and Lloyd Green.

The pitch was hard and bumpy and Westlands chose to shoot uphill in the first half. We kept it tight and restricted the home side to only a couple of half chances, half time 0-0 and all going according to plan. In the second half Sports started to put the pressure on and Marc Caines and Sam Jarman began to cause the Holt defence a few problems with balls knocked in behind. In the 60th minute came the moment of the match, and of the season for that matter. Marc Caines broke down the left wing, looked up, and curled a dipping shot over the keeper’s head into the net ! A superb goal and with the resolute Westlands defence giving nothing away, it proved to be the match (and league) winning goal ! A great moment and one never to be forgotten.

I don’t think there were any goals of that quality on show at Sherborne on Saturday but nevertheless a fine hat-trick by a striker whose name is ingrained in Westlands history.

Sunday 4th March.............with the football totally wiped out this weekend we can have a look forward to next week's Somerset Senior Cup Quarter-Final against Stockwood Green. The other six  teams still in the competition, along with ourselves and Stockwood Green, are COLLUMPTON, NAILSEA & TICKENHAM, NAILSEA UTD, WORLE, WESTON ST JOHN'S and KEYNSHAM TOWN RES. A look through the archive for past history with these clubs reveals that back in season 2009/10 we played two of them on our way to lifting the trophy. On the 7th of November we were drawn away to WORLE in the 1st Round. This was a tricky tie as it was a bumpy little ground, a cold wet day and a team from a lower division who had nothing to lose and would battle all the way in front of their own fans. Once the game settled Sports were clinical with their finishing and went into a 3-1 half-time lead with two good goals from Jack Williams and one from Faisal Mali. Worle got one back early in the second half to make it tight for a while at 3-2 but a Steve McDaid goal and a late solo effort from Matt Day made the final score a fairly comfortable 5-2. I seem to remember a curry in a local pub with Mark Farthing after the match being one of the highlights on a cold day. That win got us going in the cup but in round 2 we just scraped through on penalties at home to local rivals Ilminster Town before travelling away to face NAILSEA UTD in round 3 on Saturday 16th January 2010. We hadn't played for five weeks due to the weather so it was a great effort by Nailsea to get the game on and the pitch looked in excellent shape. This was an end to end match that could have gone either way but was won by Sports with a Sam Farthing opportunist goal in the 65th minute. Steve McDaid started the move with a through ball to Dean Corden whose shot was blocked but Sam was following up to slot in what proved to be the winning goal. Westlands solid defence did the rest and we were through to the next round. A defeat of Cutters Friday by 2-0 at Alvington in the quarters was followed by a 3-1 win at Brislington in the semi-final before that memorable evening in May at Street when we beat Cheddar 2-1 to lift the cup. So, two old opponents may lie in wait for us this season IF we can manage to beat Stockwood Green on Saturday.

Sunday 20th May..............Sports lifted the Dorset Premier League Cup with a 2-0 victory over Hamworthy Recreation at Sturminster Newton yesterday. HENRY LAWRENCE-NAPIER headed Westlands into a half-time lead and SAM PLUMLEY netted in the second half to clinch the victory. It was a great day out for everyone and many thanks to the big support who got behind  the team.

IT'S RUNNERS-UP FOR SPORTS

Sunday 27th May...………….Westlands had to settle for runners-up in the league yesterday as they went down 2-1 to Balti Sports in the final game. It made no difference in the end as Hamworthy Recreation won 4-2 at Bridport to clinch the title.

Monday 4th June...…………..Friday night was Presenttion Night with the event once again held at YTFC. A good crowd turned out to see former manager and local celebrity Stu Smith present the awards. The winners were as follows :- 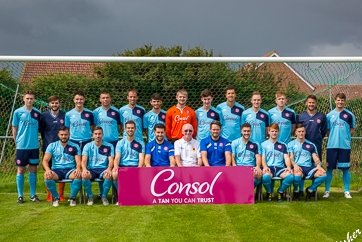 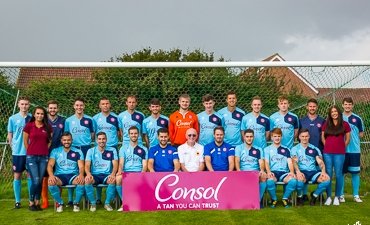 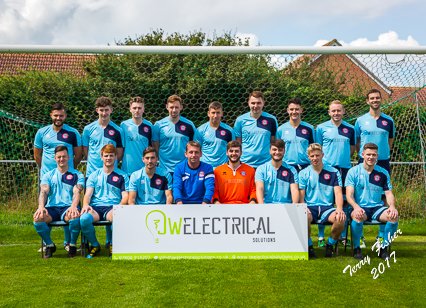 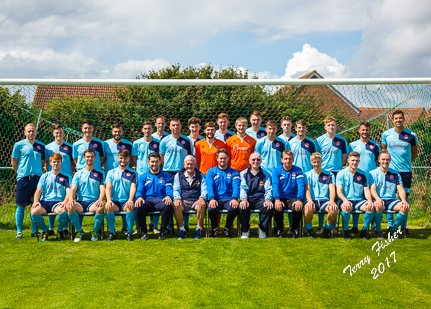 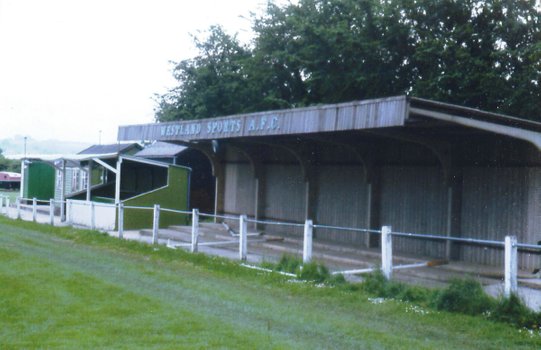 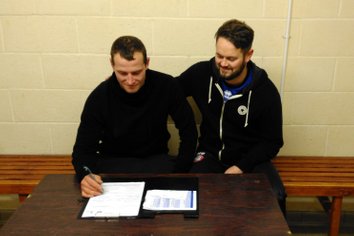 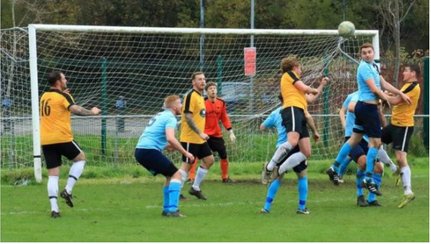 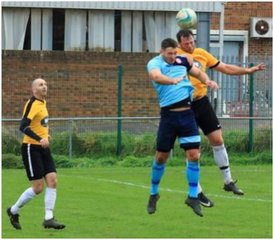 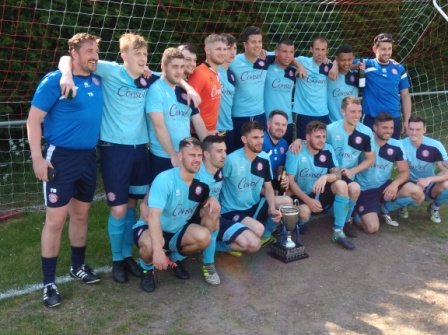 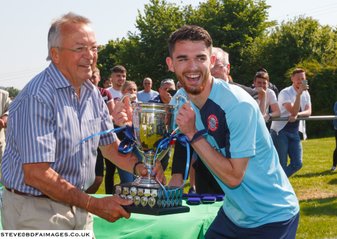 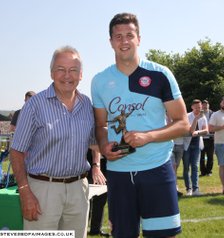